Some people’s reaction to a fully nomadic lifestyle is that it must cost a lot. I mean, you’re essentially on full-time vacation right and vacations are expensive! Well, that’s not quite how it works. There are actually some financial advantages to living nomadically, most definitely if you travel abroad to lower cost of living countries, but even within the U.S. in medium and high cost of living metro areas. There are also some disadvantages depending on the style of travel you choose.

When I was planning to leave my apartment behind in Charlotte, I wanted to make sure that I was doing it in a financially-intelligent way because I wanted traveling to be sustainable long-term. My goal was to keep my general expenses roughly flat with the expectation that I was going to spend a little bit more overall between increases in Airbnb costs compared to renting and “exploration” costs of being in new places all the time.

There are many ways to travel nomadically throughout the U.S. and abroad, some cheaper than others — RVs, Airbnbs, hotels, short-term apartment leases, van living, corporate housing, dirt bagging, and more. In this post I’m going to compare my Airbnb lifestyle vs. my previous lifestyle of apartment renting in Charlotte, NC. We’ll take a look at two months of spending and see where the increases and decreases were, and what expenses came up or dropped out entirely. I’ll also talk about some of the more subtle and hidden advantages and disadvantages that don’t really show up on a monthly budget.

As a brief aside, I say Airbnb but this could just as easily be VRBO or one of the other similar services. My experience has been that Airbnb has been drastically cheaper than VRBO while still providing some amount of security compared to cheaper rentals available on Craigslist or Facebook marketplace for example.

This post is obviously going to be extremely subjective to my own situation, but will hopefully be applicable in a broad sense if you’ve ever been curious how much long-term travel changes expenses. And if you aren’t into the nitty gritty of looking at a monthly budget, check out the summary section at the end.

Two months of spending are shown below — a month from Charlotte prior to leaving and a month during travel while I was in Austin, Texas. One thing that’s hugely variable between months when I’m traveling is Airbnb costs. Since I often book and pay for Airbnbs well in advance there are months when my “rent” is essentially zero. For simplicities sake, I’ve included the cost of my Austin Airbnb below, even though I didn’t actually pay for it during this month. 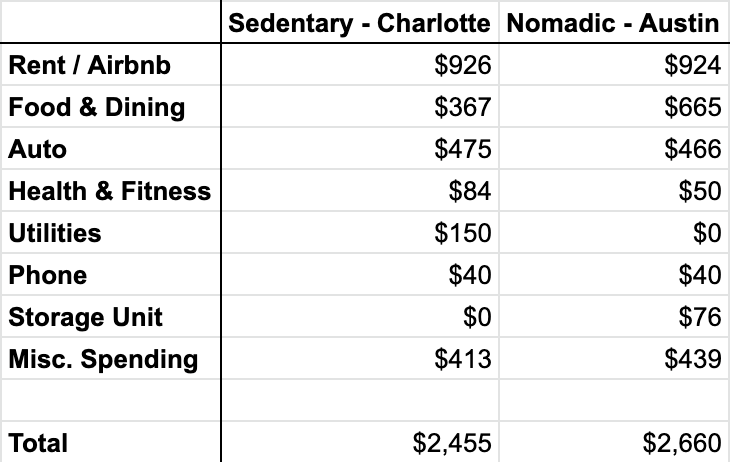 A few notes on some of these budget categories:

There are a few things to point out:

Utilities cost is gone and a storage unit was added
Staying in Airbnbs means that you aren’t paying for any utilities — that means no electric or gas, no internet, no cable, no water, no garbage, etc. I rented a storage unit when I moved out of my apartment in Charlotte which adds an expense, although less than what I was paying on average for utilities. The utilities cost is also factored into Airbnb prices.

My food and dining costs were fairly high in Austin
I ate a lot of tacos while in Austin, went to a bunch of coffee shops, saw a lot of live music, and generally was eating out and going out a lot more than I typically do. While my food costs have been generally higher in the months that have followed due to eating out more than I did in Charlotte, Austin was definitely on the higher end of the spectrum.

My rent and Airbnb costs were basically the same
This is a bit of an abnormality though, as my Airbnb costs are typically higher than what I paid in Austin and are averaging out to closer to $1,200 a month. This is not necessarily cause for alarm though, as utilities are bundled into the price of an Airbnb and there are other advantages to Airbnbs as well:

There are several things that might not show up on a monthly budget that can have an impact on finances.

Taxes
The biggest one likely will be taxes. When I moved out of North Carolina, I domiciled (established residency) in Texas using a mail service where I have all my mail forwarded to. Texas has 0% state income tax while North Carolina has a ~5.5% state income tax, so by “moving” to Texas I immediately increased my income by 5.5%. This obviously varies depending on what state you are in, but if you aren’t already living in one of the seven states with no state income tax, you are going to be saving some amount of money by cutting out state income tax.

Vehicle wear and tear
This didn’t happen to show up in my gas bill for my time in Austin, but I have been putting a lot of miles on my car. Traveling long-term by car and going on weekend adventures to surrounding areas of wherever I’m staying is clearly going to add some additional mileage. I don’t typically budget for things like auto repairs and oil changes since they don’t show up on a monthly basis, but overall I would expect this category to increase as I’m traveling more.

Vacations
Another potentially large difference is vacation cost. Since I’m able to go where I please right now and wherever I stay is part of my regular monthly spending, “vacation” changes from potentially large travel and accommodation expenses to just taking time off whenever I happen to be where I want to vacation. On the flip side of this, I’m always somewhere new, and so spending on things like museum or sightseeing admissions and other “exploration” costs will be higher overall. Most of my cost in that respect is fairly low since I do a lot of lower-cost activities on weekends like hiking and climbing, but for someone who, for example, wants to aggressively experience the nightlife or likes taking guided tours, this category could be quite a bit higher.

Gym
Gym costs are another small difference that will likely be higher during travel. For me this is a rock climbing gym membership, either day passes or a pre-paid monthly pass. In either case this is going to be more expensive than being a regular member.

Amount of space
Lastly, my apartment in Charlotte was a single bedroom apartment that I had all to myself. The Airbnbs I’ve stayed in have been a mixture of shared spaces (e.g. renting a bedroom in a house with shared common areas) and small furnished apartments. In general for a comparable amount of money, you are going to get less space with Airbnb as opposed to renting an apartment. This isn’t a huge issue for me, and I’ve actually quite enjoyed staying in shared spaces while traveling, but it is worth considering.

Mail service Traveling full time means you need a mail service of some sort — this is generally around $100-$200 a year plus postage to have your mail forwarded to you. Not a huge expense, but worth noting!

There’s a lot to consider when thinking about traveling full time. Let’s quickly summarize the main differences between sedentary costs and nomadic costs:

Hopefully this was a helpful breakdown of the differences between living a sedentary lifestyle and a nomadic lifestyle. I’ve found that I’m generally meeting my goal of keeping my spending close to what it was, without feeling like I’m missing out on anything or not doing anything just in order to keep spending down. This is a time in my life of immense freedom and I definitely want to get the most out of it that I can — being financially-minded while doing so is great but it also must be balanced with taking full advantage of the freedom I have right now.

Do reach out in the comments below with any thoughts or questions!